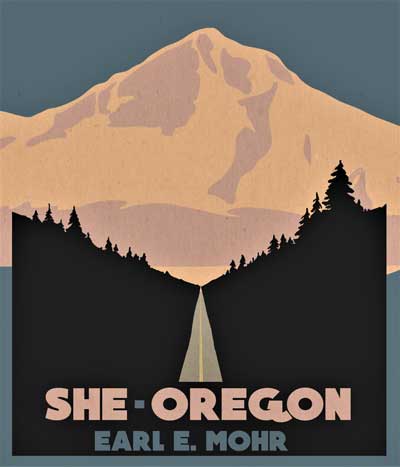 Ah, but when the Rain Blanket moored at The Dalles
All that remained within her holds was perfume of an
Essence that causes men to be lured to the earth,
Much as they are to the tiny drop behind a lady’s ear.

In his first volume of dramatic verse, SHE-OREGON, Oregon writer, Earl Mohr, presents a vision of awakening with his relationship to Oregon. In this collection, Mohr explores a variety of themes including the exploitation of Oregon, its land, water, indigenous peoples, and the perceived myths he doesn’t accept. He bends to making up of his own myths.

“My major delight in this book being released is relief,” said Mohr “Relief at showing ways this State herself, along with her women, as well as a few good men, reached out and offered me hope and opportunities. At the same time she suffered, and she suffers elder-abuse to this day.”

“Fifty-plus years I imitated many different formats for my poetry,” said Mohr. “I am most comfortable, I finally admitted to myself, in the dialogues of poet-playwrights, a holdover from student days of theater in the 1960s.”

The book, first in a projected trilogy of verse, contains 38 pieces, the first written in 1966, the last one in 2018. Three voices, SHE-OREGON, SCENE SPEAKER and ECHO interact with one another in each piece. The poetry has its settings take place in a variety of Oregon places, including the Columbia Gorge, Willamette Valley, the High Desert and Oregon Coast.

“SHE-OREGON is the most remarkable book of verse I’ve come across in Oregon literary history,” said Nestucca Spit Press Publisher Matt Love, author/editor of 21 books about Oregon and 2009 winner the Oregon Literary Arts’ Stewart H. Holbrook Literary Legacy Award for his contributions to Oregon literature. “It’s practically a unique genre all unto itself,” he added.

For years Mohr was a guest reader in school classrooms in Curry County, Oregon as the Reading Wizard of Od’. During those years, Mohr also conducted literary open-mic sessions at Gold Beach Books. He and Carolyn, along with two Bengal cats, make their home in Oregon.

Ask for SHE-OREGON at libraries and bookstores in Curry and Coos Counties. Soon to appear to other areas of the Willamette Valley, the Columbia Gorge, Central, and Eastern Oregon.

Customers can use Paypal or make other arrangements for payment by email to the author or contact through this web site.