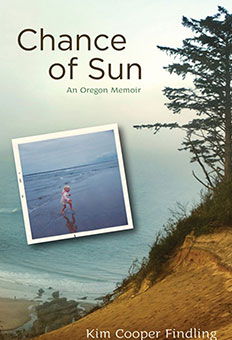 In her debut as an author, Kim Cooper Findling’s Chance of Sun: An Oregon Memoir, unfolds the story of an Oregon girl coming of age in the 1970s and 80s, navigating her way through pick-up trucks, dive bars, higher education and backwoods trails before finding a place she belongs.

Bend writer Kim Cooper Findling is having a banner year. After a decade of landing essays in in-flight magazines, freelancing for local publications and entering literary contests, she’s enjoying the thrill of seeing two books published in one year.
Her first, a travel guide titled “Day Trips from Portland, Oregon” was published in May by GPP Travel, an imprint of Globe Pequot Press. Now, Nestucca Spit Press, a small publisher of Oregon-related books, is publishing “Chance of Sun: An Oregon Memoir,” about her life and self-discovery in Oregon.

Beginning with her childhood in Coos County, Findling relates a rural unbringing spent walking beaches and hiking in the woods with her forester father, attending summer camp just over the hill from the Oregon Country Fair, road-tripping to the Oregon Shakespeare Festival with schoolmates, and learning about the fickleness of love in campgrounds, beer joints and on the University of Oregon campus. Yet, following a move to Oregon’s biggest city after college, Findling lost her way and her connection to Oregon’s landscape, becoming caught up in the drugs and booze that flowed so freely in Portland’s restaurant scene. But it was Oregon that helped Findling find herself again later, this time on the east side of the mountains, where she found clarity in High Desert trails and a wide-open sky, as well as life’s most grounding phenomenon—love.

In 23 essays set over 20 years, Findling traces her own coming-of-age story against the beauty and complexity of the Oregon landscape. Nestucca Spit Press Publisher Matt Love writes,“In Chance of Sun, Kim Cooper Findling presents a fresh and distinct literary voice. I might even call it sexy. At long last we have a memoir by someone that captures the fantastically loose and earthy spirit of growing up in Oregon during the 1970s and 80s.”